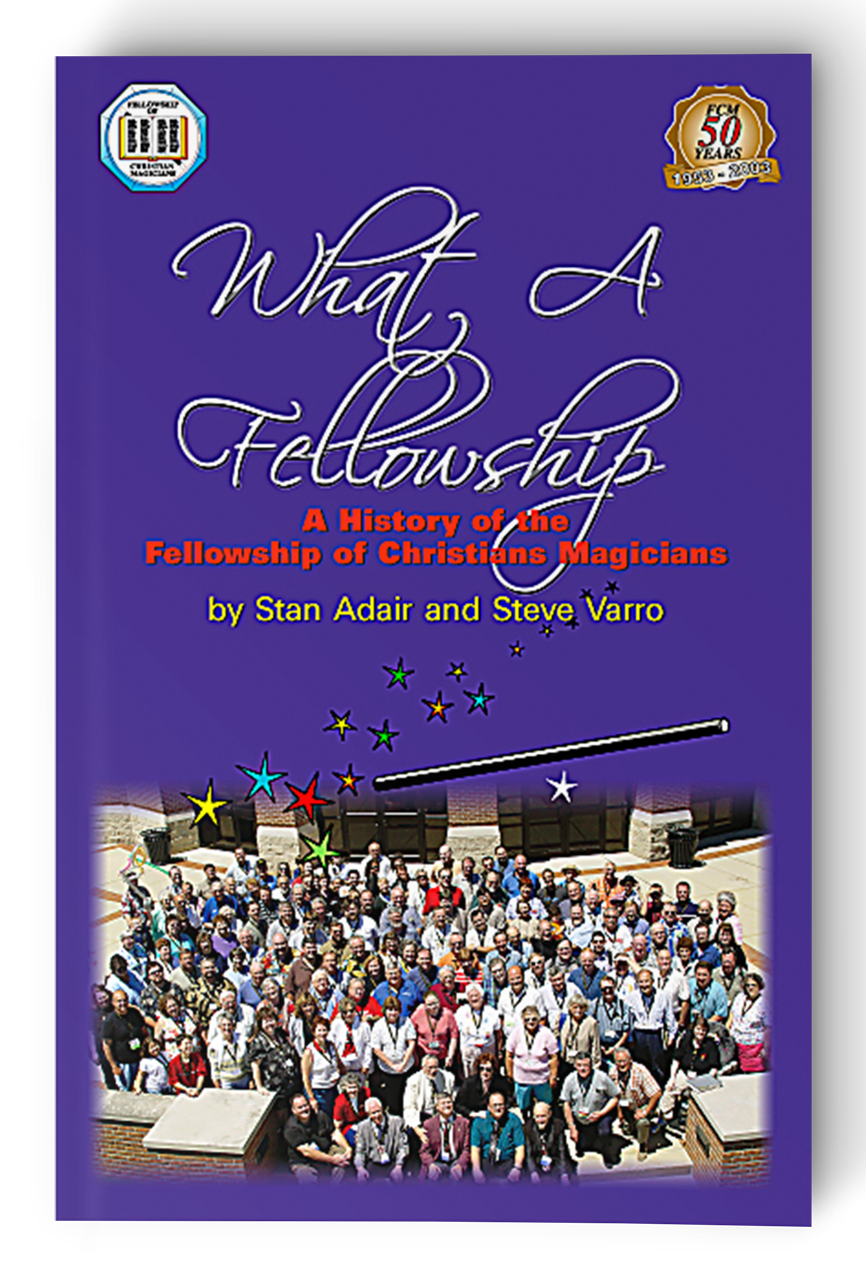 This is an excerpt from Stan Adair’s book, What A Fellowship: A history of the Fellowship of Christian Magicians.

The idea was conceived in 1947 but wasn’t born until six years later. I was directing Youth For Christ in Denver, Colorado, and we had as our speaker, a young Christian magician by the name of Dr. Joe Kemp. Joe was from southern California, had been doing magic professionally for a number of years, had accepted Christ as his Saviour and was now using his talent to serve the Lord. I was intrigued by his bag of tricks and fascinated by his clever sleight of hand. As happens in most cases Joe came and went and our paths didn’t cross until several years later.

About 1950 I had moved my family from Denver back to California and had recently settled near the San Francisco area in the small town of Los Altos. It was our first Sunday in town and we had decided to attend church at the First Baptist Church and to our surprise the guest speaker was Dr. Joe Kemp. Once again we enjoyed his masterful magical manipulations, listened as he presented a simple gospel message and rejoiced to see a number of young people respond to his invitation to accept Jesus Christ as Lord and Saviour.

I observed his “magic” with new eyes. I realized, for the first time, that these baffling effects could be convincingly used to present the gospel and to win souls for the Master. His presentation was interesting, he kept everyone’s attention, the gospel was given in a clear way and God used Joe’s efforts to the salvation of souls. I had been bitten by the gospel magic bug.

A nephew of mine began to take an interest in magic and discovered a great place for magic supplies at the Golden Gate Magic Studios in San Francisco. The owner, Tom Dethlefsen, always had a big smile on his face and took a special interest in those who were just getting started in magic. Dethlefsen, who had been a professional magician had the patience of Job. He took hours to perfect the style of this young magician who didn’t know the difference between a French dip and a French drop.

I often wondered if there were any other Christian magicians in northern California. Over a period of time I came across several who were using magic tricks as object lessons. I reasoned that if I could only talk to some of these folks I could learn something of showmanship, what to do, what not to do, and how to stay away from the pitfalls. So it was a special treat when I found a Christian brother in Tom Dethlefsen.

One day in a discussion with Tom he mentioned that there were a few pastors, laymen and Sunday School teachers who had been coming into his store to buy items for use in their respective churches. Among the names mentioned were Rev. James Knorr and Helen Easterly. Rev. James Knorr was a Methodist minister and a clever magician. Helen was very active in her local church where she taught a Sunday School class and did some chalk drawing before she got into gospel magic.

Tom arranged a meeting for the four of us. We discussed the possibility of a small group meeting bi-monthly simply for the purpose of encouraging each other in our efforts at “Gospel Magic”. We set a purpose, we prayed, we planned, and there became a very close bond between the four. In the next few weeks we set a date, a place and a time, made up a list of Christian magicians and sent invitations for our first meeting. The year was 1953, the date was November 27.

The 19 people who met that night were an unusual group. They came from many different locations around northern California, some traveled over 200 miles, round trip, from their homes. They had quite a range of ages, from high school students to those who were retired. Occupations varied from college kids, pastors, seminary professors, businessmen, and housewives – to one man, Edwin Brush (“The Great Brush) who had traveled the professional magic circuit for over fifty years. The group was different in their religious denominational convictions and in racial backgrounds. They had one thing in common, however, and that was a desire to use magic effects as object lessons in their service for the Lord.